10 most popular and played racket sports in the world

Characteristics, history, fun facts, equipment, rules and much more about the most popular racket sports in the world

What are racket sports

Racket sports are a group of sports where players use rackets to hit balls or other objects, such as the shuttlecock on badminton.

There is no real record of who invented the racket sports. Regardless of that, the fact is that it has caught on. Today there are more than 30 racket sports being played around the world, each of them with its own particularities.

The 10 most practiced racket sports in the world are: 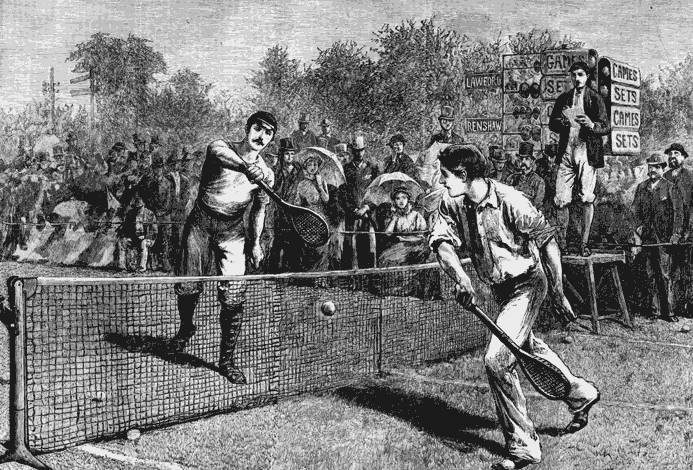 The origin and history of tennis

There are several versions about the origin of tennis. Some speak about the ancient Egyptians, Greeks and Romans, thousands of years ago. Others, refer to a more recent times, crediting the French and English as the creators of tennis.
One of the more evidence-based versions for the origin of tennis suggests that it originated in the 12th century, when French monks used their hands to hit the ball on a rope hanging in a courtyard. The game was called je de paume, hand game. According to this theory, the sport ended up calling tennis because before serving, the monks used to shout the word “tenez”, to take or to receive in French.
The influence of the English at the beginning of the sport is undebatable. The first officioal tennis tournament in the world was held in London in 1877, Wimbledon.

The tennis racket is made of several materials, however, today we will be focusing only on the main ones: aluminum, most of them, alloys such as titanium and graphite. The weight of a racket is quite variable. An average for performance rackets is between 270g to 330g. It has a size limit of 73.7 cm long and 31.7 cm wide, with a head of at most 39.4 cm long and 29.2 cm wide. 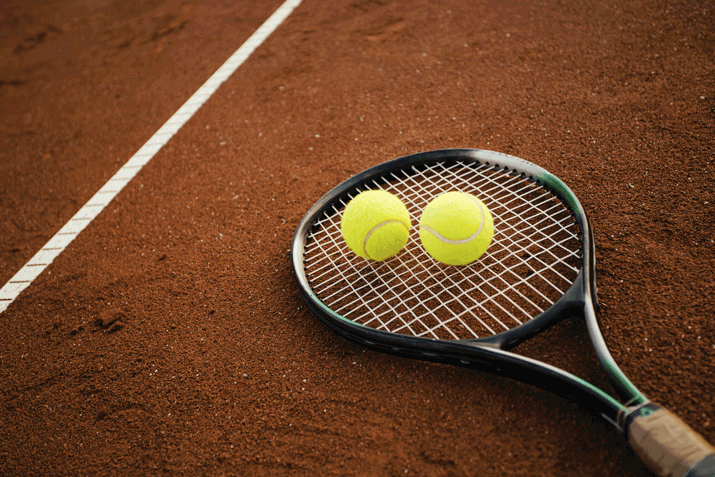 A tennis ball is mainly made of rubber, covered with filters. It is usually yellow or green in color with white stripes. A ball weighs, on average, 56 to 58 grams, with a diameter between 6.35 and 6.67 cm.

The tennis court has a flat surface and may vary between grass, clay or hard floors (cement, synthetic rubber, carpet or asphalt mud).

It’s measures are 23.77m in length, 8.23m in width for the singles area and 10.97m for doubles. It is also necessary a space around the court so the players can reach the balls even outside their limits. A 1.07m high net on the borders and 0.91m in the center divides the court in half. 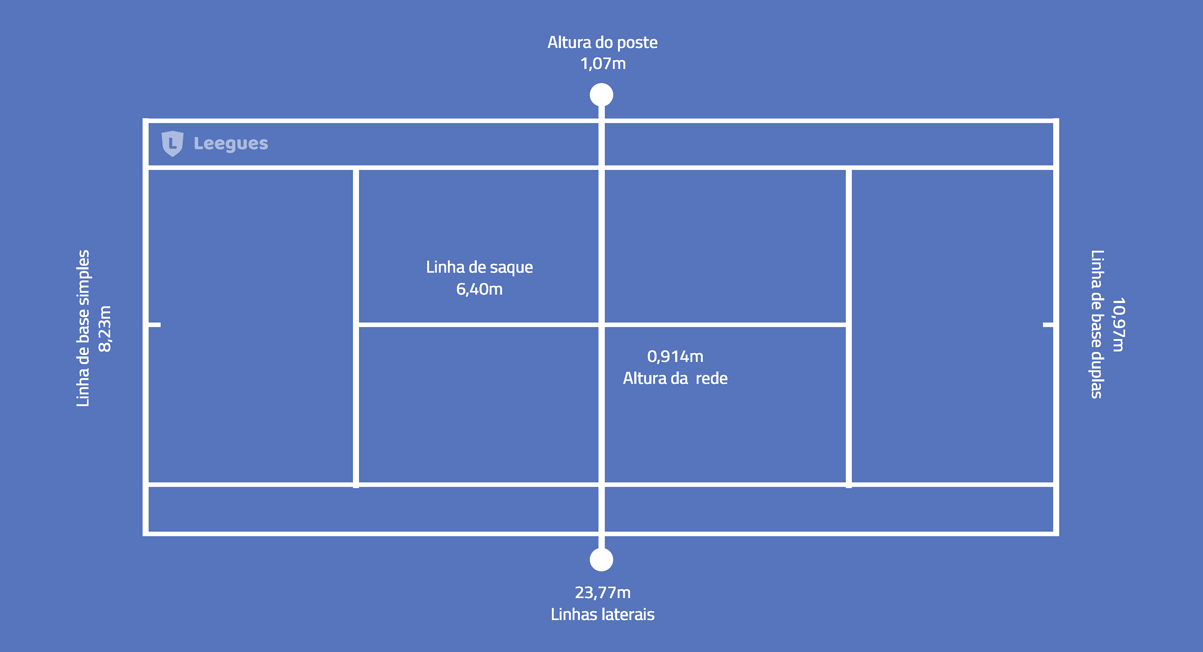 The bottom lines are the baselines. There are also service lines, one on each side of the court, positioned 6.4m away from the net. This area is divided in half, indicating which side the point will start on.

A tennis match is most often played in a best of 3 or 5 sets. These sets are divided by games and whoever makes 6 games first wins the set. The player must win by at least 2 games of difference. In case there is a tie on 5 games to 5, it’s necessary to make 7 games to win the set. If the set is tied again in 6 games to 6, a tiebreak is held, where whoever scores 7 points first is the winner.

Now that we understand how many sets have a match and that a set made of games, let’s understand what a game is:

One of the players always has the right to serve during a game, and this right is alternated each game throughout the match. To win a game, it’s necessary to win 4 points, however, there is also an obligation to win by two points of difference, in the case of a tie in 3 points for each player. Each point in tennis has a value according to the order in the game: 15> 30> 40> Game.

The score works this way in tennis because in the beginning of the sport, the scores was marked on clock walls. It starts pointing upwards at zero, then to the right at 15, down to 30 and, finally, to the left at 45. When the rule changed to state that a player should have two points in advance should to win a game, a change on the score was also made from 45 to 40, adding the advantage, which would be 50.

Badminton was originated in India and brought to England by its military around 1870. The sport was called poona, in reference to the city of Pune, where it was very popular and the first rules were created. Is not really certain why, but the name change was due to the country house of the Duke of Badminton, in Gloucestershire.

Despite being made with materials similar to the tennis rackets, the badminton racket is lighter, weighing up to 100g, with a much smaller head and a longer handle. 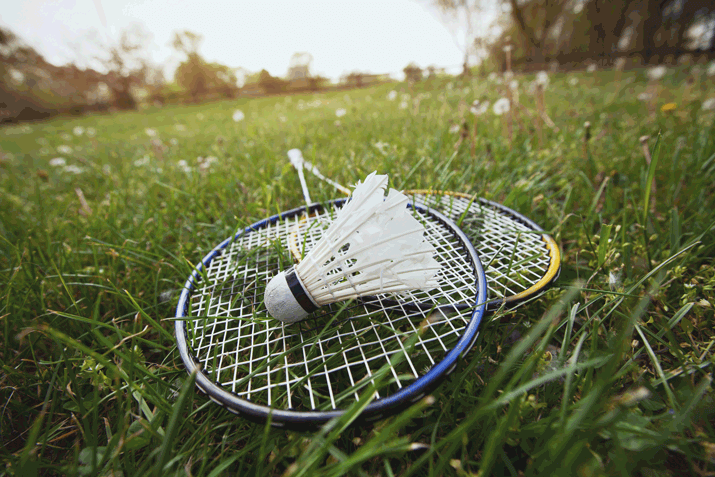 Badminton is practiced with a shuttlecock in place of the ball, which weighs only 6 grams and has 16 goose feathers. Although it’s light, the shuttlecock can reach a speed of more than 300 km/h.

The badminton court is 13.4m long and 5.18m wide for singles matches, and 6.10m for doubles. The floor must be made of non-slip material. It has 6 lines: double side, single side, central, double long service and single long service. A net 1.55m high from the floor divides the court in half.

Badminton matches are generally played in a best of 3 games. Each game consists of 21 points, with the obligation to win by 2 points of difference. In the event of a tie in 20 points, whoever opens a 2-point advantage wins the game. Another exception is a tie at 29, where the player who turns 30 will be the winner. Read more about badminton rules

There are two versions for the origin of squash, both in England, in the 19th century:

Similar to a tennis racket, but with specific differences: It’s lighter, weighing between 130g to 160g, has a slightly smaller and flatter head, and has a smaller number of strings. 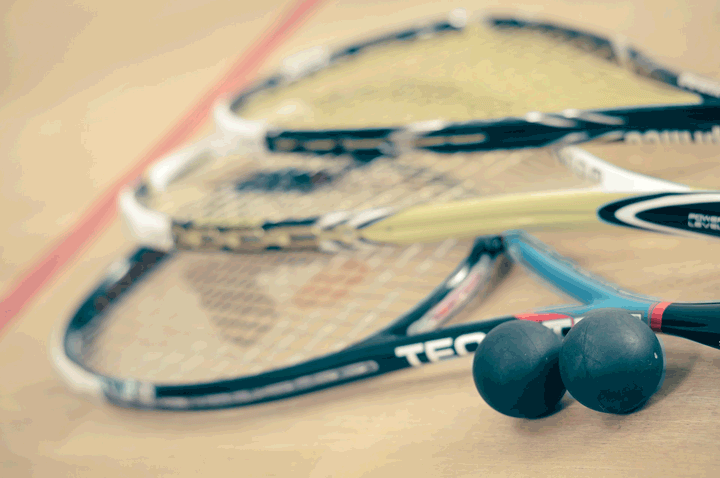 The squash ball is a small black rubber ball, with approximately 13cm circumference  and 20g weight.

Four walls close the squash court, and the back one is made of glass. The court size is 9.75m length and 6.4m width. 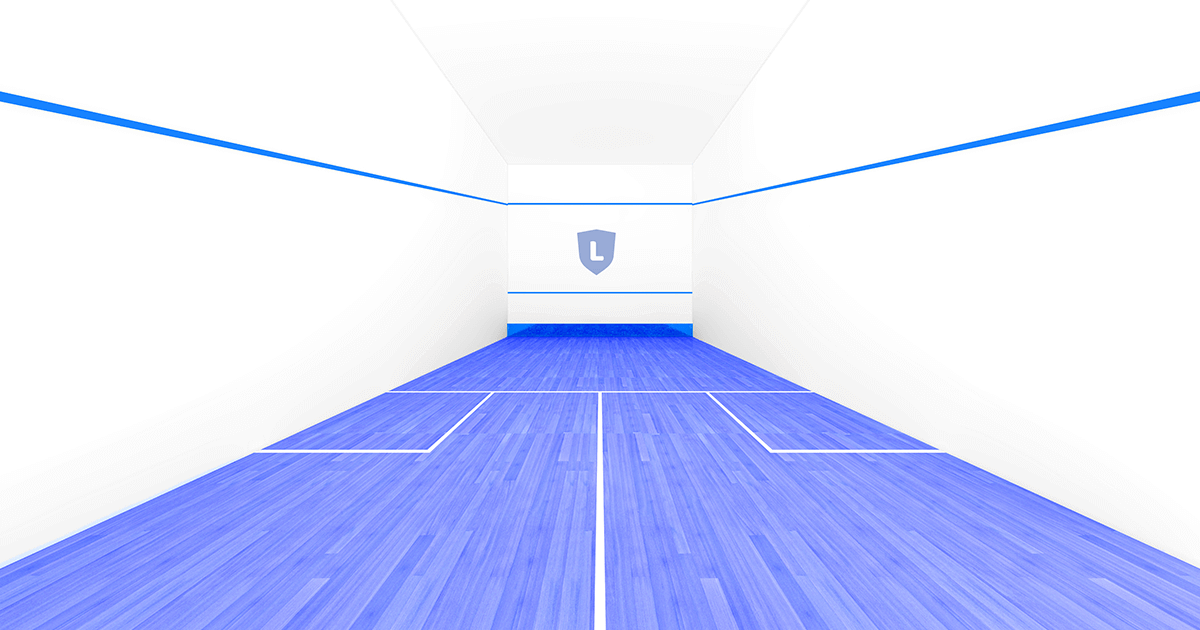 A squash match is played in a best of 3 or 5 games, similar to badminton. The difference is basically in the amount of points in each game. In squash, the player needs to score 11 points to win a game, not 21 as in badminton. Unless there is a draw in 10, where whoever makes a 2 point advantage in the following points will win the game.

The english once again… and this time on the sea! They made an adaptation of tennis in 1890, calling it “high seas tennis”. It was played on boats, with smaller dimensions and screens protecting the sides.

The sport arrived on dry land in 1924, when the North American Frank Beal improvised a few courts in New York. It then became known as “paddle tennis”, since it used a short-handled palette instead of rackets.

The biggest difference between the paddle racket and the others already mentioned here so far is the lack of strings. It’s made of kevlar, carbon or fiberglass. The racket must have a flat surface and always have a safety cord on the handle. Its measurement is 45.5 cm long, 26 cm wide and 50 mm thick.

The Padle ball is exactly the same as the tennis ball that we mentioned a few paragraphs above.

The padlle court is formed by a rectangle 10m wide by 20m long. A 88cm high net at the center and 92 on the borders divides the court in half. At 7 meters from the net on each side, there is a line of the service area is demarcated, divided by another line in the middle, called the central line. Divided in half by the imaginary line, contiguous the “central line” forms two more rectangles of 3 x 5 meters, “right and left serve area”. 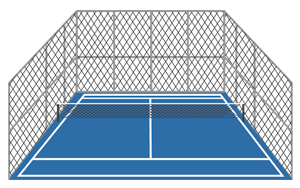 A 3m high wall complemented by a 1m metallic screen surrounds the back of the court. The walls and metal screens on the sides follow variations accepted by the IFP. In case of indoor courts, the height cannot be less than 6m.

Paddle is a doubles sport, played by 4 players, two against two.

The scores rules are the same as tennis, which we mentioned a few paragraphs above.

Beach Tennis emerged from the matkot in the 1980s, on Ravenna’s province, Italy. In 1996 some rules were introduced and “International Federation Beach Tennis” (IFBT) was founded. Only recently has the sport arrived in Brazil, however, it is already one of the most practiced racket sports in the country.

Very similar to paddle’s racket, it is usually made of fiberglass, graphite or carbon / kevlar, the latter being the most used by professionals. The racket has holes to decrease air resistance, so it doesn’t take much force to hit the ball.

The balls used are tennis balls for beginners, softer, play and stay balls for example.

The court is similar to a beach voley court, with a sand surface, 16m long and 8m wide. A net with 1.7m separates the court in half.

Scores on beach tennis follow the same line as tennis, with the exception of no-add, with no advantage. Another difference is in the serve, where the players don’t have a second chance. If you miss the first serve you lose the point.

Racquetball is a racket sport that resembles squash. The court is closed between walls, just like squash, but it’s a bit longer. Another difference between both sports is the ball. The size of the ball in racquetball is much larger than squash’s ball, in addition to being more resistant.

Racquetball is one of the most practiced racket sports in the United States.

Pickleball is a sport that combines similar characteristics from badminton, tennis, table tennis and paddle tennis. The pickleball racket is shaped like a paddle, is usually made of wood or graphite. And the ball is a hollow plastic ball with holes.

Pickeball’s court is similar to the tennis court, has a slightly smaller size and uses the same net.

The sport has become popular all over the world in recent years, specially in the United States.

Matkot is a racket sport played on beaches, usually with two people. The sport was created in the 1940s, in Rio de Janeiro, Brazil, between the years 1945 and 1946. Today it is practiced in several countries, very common on Israel beaches, for example. In portuguese, matkot is called frescobol. Italians call it Racchettoni.

Matkot is played with a wooden racket and a rubber ball. It’s the only one of these racket sports on this list that collaboration between players prevails over competition. The goal is to volley the ball to the teammate and keep the it in play for as long as possible, without letting it fall to the ground.

Gym racket is a racket sport generally practiced between 4 people, in doubles. It was created in Italy and has been part of IFBT since 1997. The sport can be played on both indoor and open courts.

Gym racket rackets resemble beach tennis rackets, have no strings and the surface is flat with a few holes. Its length, from the cable to the head, cannot exceed 50 centimeters, while the width limit is 30 centimeters.

It’s played with a rubber ball, with an external surface in red and yellow colors. Diameter measurements should be between 6.35 and 6.50, with a weight between 38 and 40 grams.

At Leegues you manage all your racket sports competitions, from subscriptions to generation of backets and rankings. Get to know the tournament management system!